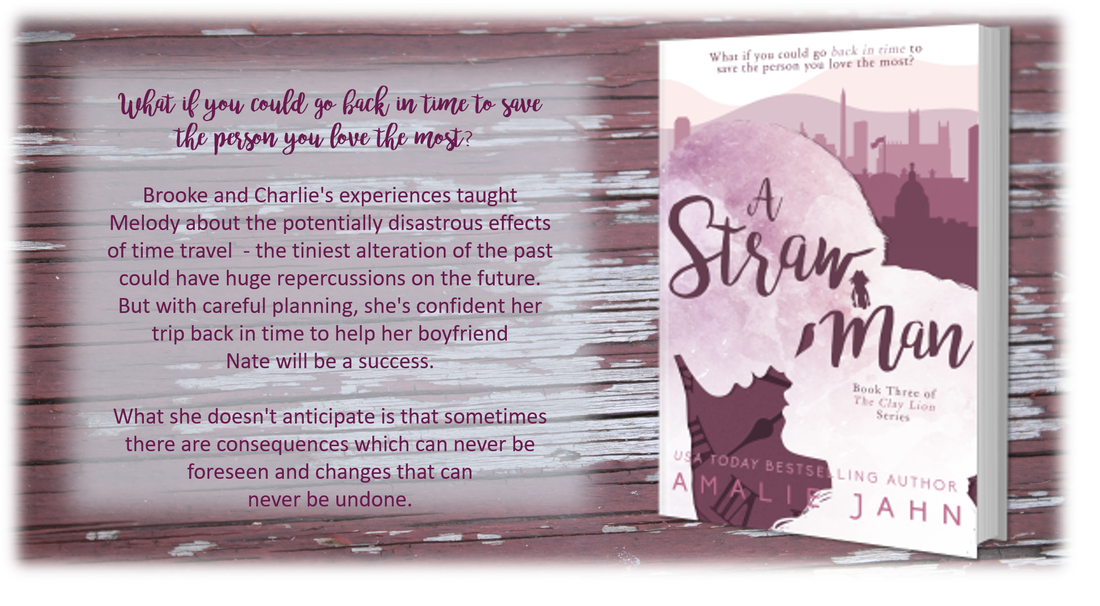 What if you could go back in time to save the person you love the most?

Nate's funny. He's a football player. He's ridiculously handsome. In fact, it seems as if Melody's dating the perfect guy,
until an unexpected tragedy changes everything about him.

Based on her own family's experiences, Melody knows traveling in time to help him could have disastrous results - the tiniest alteration of the past can have huge repercussions on the future. But with careful planning, she's confident her trip will be a success.

What she doesn't anticipate is that sometimes there are consequences which can never be foreseen and changes that can never be undone.

Goodreads reviews for A Straw Man

I picked up the last card from the stack and placed the three of hearts on the four of spades and the ten of diamonds on the Jack of clubs.  One by one, each of the cards found a home on top of its designated suit until four neat piles topped with kings lay on the end table beside me.  It had taken me seven tries and the better part of an hour to finish one complete round of solitaire.

“Finally,” I said with a burst of relief, readjusting my position as I slid my feet from beneath me back onto the floor so I could turn my attention to Nate.

In the chair on my left, he continued sleeping peacefully.  His head was tucked into his chest and a trickle of drool pooled at the corner of his lips.  My instinct was to wipe it away, but I knew better than to disturb him.  With the stress of the night on top of everything else, there was only one explanation for how he was able to nod off so quickly while the rest of us remained steadfast in our vigil.  And although I would have welcomed his company, I could not deny him respite, especially when for him sleep was such a precious commodity.

It had been a difficult year for the two of us.  Nothing had been the same since the accident in September, the night Nate changed forever.  As I listened to his shallow breathing, it brought me comfort to know that despite his struggles, he was still beside me, even if it was only because I couldn’t bring myself to give up on him.  He was a whisper of the man I’d fallen in love with our first year, but as I turned to gaze at him, snoring softly through parted lips, there was still a glimmer of the man he used to be.  Most nights, even sleep didn’t offer relief from the burden of his guilt.  I worried for him, although I was out of ideas for ways to help.

His path of self-destruction seemed to have no end.

After suffering for three consecutive hours on the uncomfortable waiting room chair, I stretched my arms above my head and worked at relieving the fatigue in my joints.  As I glanced around at my family, it felt selfish to be thinking only of Nate when they were also in need of prayer.  The middle of the night phone call from my brother Charlie had been filled with both frantic exuberance and fear.  Today would be a big day for him.  And for his wife, Brooke.  And for me too, I supposed.

Brooke’s mother rested awkwardly under the crook of her husband’s arm.  Their eyes were closed but they weren’t asleep.  My mom stared blankly at the pages of an outdated magazine, but I hadn’t seen her turn a page in over half an hour.  She chewed the tip of her thumbnail nervously, humming softly to herself.  For everyone’s sake, I hoped we wouldn’t need to wait much longer to find out what was going on in the ward beyond the double doors.

My stomach growled.  The clock on the wall indicated the sun would soon be rising, but there was no natural light in the waiting room, only the harsh glare of the fluorescents overhead.  I had just decided to set off for the vending machine around the corner for a donut when Charlie burst through the doors wearing ill-fitting scrubs and a smile that stopped my heart.

Everyone was suddenly wide awake.

In one swift motion, we crossed the room to him, swept up in the emotion of the moment.  Mom wrapped him in her arms, and as tears built in her eyes, the tightness in her jaw released.

“They’re both fine,” he replied excitedly.  “They had to take her via cesarean, as we expected because of the placement of the placenta, so Brooke’s gonna have a longer recovery.  But the baby, even five weeks premature…”  He trailed off, a small smile playing at his lips.  “She’s itty-bitty but she’s perfect.”

Brooke’s father squeezed Charlie’s shoulder affectionately.  “So when am I going to get to meet this new granddaughter of mine?”

He shook his head and ran his fingers through his tousled hair.  “I don’t know quite yet.  Brooke’s been moved to recovery, and they’ve taken the baby to the NICU just to run some tests and make sure everything’s okay.  She came out screaming and her APGAR was a nine, so as long as she doesn’t need any help breathing, it shouldn’t be too long before you can go back.”

It didn’t surprise me how natural talking about all the baby stuff seemed for Charlie.  He’d been a father figure to me long before our father’s death, acting as my supportive male role model for as long as I could remember.  When he announced Brooke’s pregnancy to the family in the fall, everyone else seemed relieved that they had finally decided to start a family.  But unlike the others, I was glad they waited a few years into their marriage, giving them more time together as a couple before becoming parents.  Both of them had been pushed to grow up too fast too soon, with Brooke’s younger brother Branson’s untimely death and the unusual circumstances surrounding Charlie’s adoption.

But now, after witnessing how attentive he’d been to Brooke throughout the pregnancy, I was certain that it was finally the right time for him to become a father to his own little girl.

I approached my brother, locking eyes with the person I admired most in the world.  “So, are you going to tell us now, finally?”

“Tell you what?” he replied playfully, nudging me in the arm.

I smiled at him.  “It’s time for you to tell us what you’ve decided to name her.  We’ve waited long enough.”

My demand was bolstered by a chorus of agreement from the others, including Nate who had sidled up beside me.

He welled up at the request and bit at his bottom lip to keep the tears at bay.

“It was Brooke’s idea, if it was a girl… she wouldn’t take no for an answer.”

We waited patiently for him to continue.

“We’re naming her Victoria,” he said finally, “after my mother.”